Skipping That Home Inspection? These Horror Stories Will Make You Think Again.

Skipping That Home Inspection? These Horror Stories Will Make You Think Again.

A few weeks ago, I wrote a 48-point DIY Home Inspection Checklist. This was not intended to be a replacement for an actual home inspection; rather, it was a pre-inspection list for you to use while you were walking through the home to help you determine if you wanted to make an offer.

I would never suggest you forego a professional home inspection with a licensed home inspector. Ever.

I have done this a couple of times already, and I still get a home inspection. Every. Single. House. It has saved me tens of thousands of dollars in home repairs on properties I didn’t want to buy and has given me a great head start on knowing what needs immediate attention in houses I do end up buying.

The Time the Buyers “Saved Money” by Using a Friend

Lindsay is a personal finance blogger who writes over at Notorious D.E.B.T. Her husband was military, and they were separated during their first year of marriage while he was in Iraq and she was in the states.

They were living in Alaska when he came home, and they decided to use their VA zero-down loan to buy a house.

They found a great house, and their real estate agent suggested they use one of his friends for the home inspection to save money. The friend “declared the home in perfect condition after spending 10 minutes glancing over it.”

Five years later, they decided to move to Colorado and put the house up for sale. The selling season in Alaska is understandably short. It didn’t sell, so they connected with a property manager to rent it for them while they moved on, thinking they’d just sell it next year.

The issues started about two years after they moved in. You see, a home in Alaska comes with its own set of unique circumstances, such as permanently frozen soil, which is very difficult to dig into.

This home had a septic tank that was eventually declared unusable, requiring a new permafrost-friendly system that runs around $35,000.

That $800 they saved on the inspection looks like a bargain in hindsight.

The Time the Buyer’s Dad Was a Contractor

Real estate agent Brett Maternowski shared the story of a client whose father was a contractor.

“He waived the right to inspect and instead, took a look around himself. After all, he knew houses! He gave a thumbs up after a quick look around, and the deal went through. Two weeks later, I got a phone call from his daughter, upset that her house was not insurable because the two times roofed-over roof, didn’t make the grade. This cost them about $10,000 to correct, and because the repairs were deemed dangerous, caused her to have to stay in a hotel until the work was done.”

The Time the Buyers Really Couldn’t Afford a Home Inspection

Casey Tibbs, owner of Image Squared Marketing, shared his story with me.

“My wife and I bought our home in 2004 at the age of 22. We knew we were able to make the monthly payments and had built up enough credit to get the loan, but we didn’t have enough money to pay for much else and had to forego any ‘extra’ items we could. The exterior was far from attractive and clearly needed some attention, but the interior had been partially renovated a few years prior, so we didn’t have many concerns that we felt would justify the cost of an inspection.

Shortly after taking ownership, I opened the old trap door in the pantry, climbed down the worn wooden ladder into the cellar, and immediately noticed a number of water hoses that connected to a couple of double spigots. Prior to the spigots was old galvanized piping that connected to newer PVC piping. The water hoses supplied water to our bathroom. I couldn’t believe my eyes.

A few months later, we had our first of several cellar floods. These would occur when the o-rings in the water hoses would wear out. Actually, come to think of it, it was a combination of the leaking hoses, ground water and rain that pours through the foundation, and sump pumps that would eventually just die after a life of hard labor.

Eventually, after replacing the terribly inefficient old windows (bonus fail: not a single window was the same size, resulting in a huge expense for custom windows), we remodeled the kitchen & bathroom, replacing every last bit of the plumbing at that time.

It turned out to be worse than we thought — the drain from the kitchen sink included a smaller pipe that dropped down into a larger pipe. That larger pipe did not appear to connect to ANYTHING ELSE. The smell of the soggy, saturated earth when disturbed by working hands was enough to induce vomiting.

Oh! And I almost forgot about the septic system! This is great. There wasn’t one. One day, we noticed a sinkhole in the yard. Eventually, that little sinkhole became a BIG HOLE when the buried wooden cover of an old steel tank (makeshift septic tank…) finally rotted and collapsed. We now have a modern system. You’re welcome, nature.”

The Time the Buyer Skipped the Specialized Septic Inspection

Sep Nekian, founder of Condo Black Book, recommends his clients get the specialized inspections for high-dollar systems such as septic. (Boy, septic systems seem to be prone to issues…)

“One client who was purchasing a home skipped the septic inspection against my recommendation since septic is a specialized inspection that costs an additional few hundred dollars. It consists of fully draining the septic tank and taking video of the surface to find cracks. Some buyers see a septic inspection as a bonus for the seller if the deal goes through, since now they have a completely clean tank. But it’s worth every penny because a new septic tank will cost you at least $6,000, plus the cost of replacing the landscaping that might have been damaged in the process.

The DAY AFTER they bought the place, the septic overflowed, and they were greeted with an unwelcome flow from their master bedroom. The cost was around $10K to replace the septic and redo their landscaping, along with some interior repairs/cleaning.”

The Time the Seller Was Hiding Something

Marie Haynes and her husband David from David and Marie are agents who recommend home inspections to all their clients.

One client skipped the inspection a few years ago “…because he felt he knew enough about home construction and repairs. It turns out that there was a crack in the home’s foundation that the seller had hidden by piling some bricks up in front of it. It ended up costing $6,000 to repair the problem, which is quite a bit more than he would have paid for a home inspector!”

The seller should have disclosed the crack — and obviously hid it on purpose to avoid a price reduction or the cancellation of the contract. But not getting a home inspection only helped the seller in this instance — and in many other instances as well.

The House is Listed “As-Is”

A common misconception is that when a home is listed “as-is,” that means you cannot have a home inspection performed. “As-is” doesn’t mean “no home inspection” — it simply means that any issues found during the inspection will not be addressed.

If you’re just starting out — or if you have to ask if you need a home inspection — the answer is always yes. 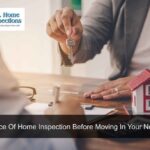 Importance Of Home Inspection Before Moving In Your New Home

No products in the cart.